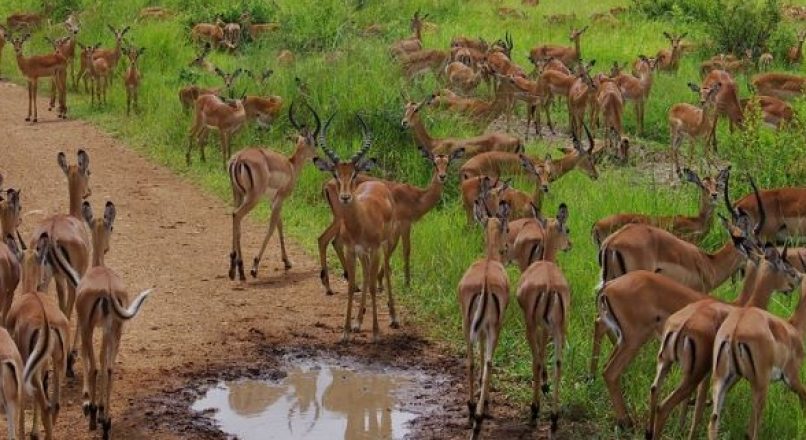 The best time for a dream safari in Mikumi  is between June and October, in the dry season, when the plains host large herds of elephant and ungulates clustering to the last remaining water sources where rare antelopes are most easily spotted in the nearby deciduous woodlands. Clear skies make for bright days but temperatures can drop at night in higher altitudes, so a light fleece is recommended if venturing into the foothills in the early morning.

Safaris to Mikumi usually start from Dar es Salaam, and your point of entry for the country is Julius Nyerere International Airport (DAR). In most cases, your tour operator will pick you up from the airport and handle all further ground operations or domestic flights. Mikumi is a four-hour drive away from Dar es Salaam and can easily be visited as a weekend get-away. However, most people visit Mikumi en route to Selous or Ruaha, the more popular parks in southern Tanzania. The only scheduled flights to Mikumi are with Safari Air Link which offers a daily connection to Ruaha, Selous, Dar es Salaam and Zanzibar.If driving from Ruaha, the distance is about 320km/200mi, and the drive takes roughly five hours.

Situated between the Uluguru Mountains and the Lumango go, Mikumi is the fourth biggest national park in Tanzania and just a couple of hours drive from Tanzania’s biggest city. The park center has a wide assortment of natural life that can be simple spotted and furthermore very much suitable to viewing in a game drive. Its vicinity to Dar es Salaam and the measure of wildlife that live inside its fringes makes Mikumi National Park a well-known choice  for those travelers who don’t have much time but also want to enjoy  a wildlife safari to mikumi national park.

When choosing the Mikumi national park lodges, you consider accessibility. The park has poor road network making some lodges only to be accessed during dry season andn ion wet season no hence making their operation to be seasonal for example Stanley’s Kopje camp it only works during dry season in in the rainy season the camp is closed due to hardness to acess. During the rainy season most guests are advised to book lodges around Mikumi town and just walk to the park.  Some of the luxury lodges found at the park include Mikumi wildlife Camp, Vuma Hills Camp and many more.

Mikumi borders the Selous Game Reserve and game migrates between the two. The main focus of Mikumi is the extensive Mkata floodplain. Here, sweeping yellow grasslands are interspersed with twisted acacia trees, where you will often find giraffe browsing on the leaves.

Mikumi borders the Selous Game Reserve and game migrates between the two. The main focus of Mikumi is the extensive Mkata floodplain. Here, sweeping yellow grasslands are interspersed with twisted acacia trees, where you will often find giraffe browsing on the leaves.

Browse other National Parks near Mbeya

There is a road running through the park, which can detract a little from the feeling of wilderness. For this reason we’ve chosen a small camp, tucked well-away near the Mkata floodplain. As this park is easily accessible from Dar es Salaam, we recommend it for two nights at the beginning of your safari before heading off into the Selous or Ruaha.